NASA has inadvertently snapped an image of a UFO three times the size of Earth near the Sun, according to conspiracy theorists.

NASA: Satellite captures a 'UFO' moving near the Sun

By analysing images fromNASA's Solar and Heliospheric Observatory (SOHO) satellite, alien hunters believe they have spotted a hugeUFOnear the Sun. The winged-object is apparently three times the size of Earth, making it truly massive. Conspiracy theorists believe the UFO is feeding from the energy of the Sun.

Prominent UFO hunter Scott C Waring states that the finding is "100 percent" proof of the existence of intelligentaliens.

Mr Waring wrote on his blog ET Database: "I was looking at the SOHO sun photo that they took today and noticed the winged angelic UFO is back again.

"It comes and goes several times a week, but we have two amazing photos of it here, usually I have only one. In one of the photos, the UFO is turning so we get to see the wings at an angle.

"Many have told me the wings remind them of a giant angel being. Well, wings are certainly not necessary for a space craft and it has to be more for actual interior room and outer ascetic beauty. 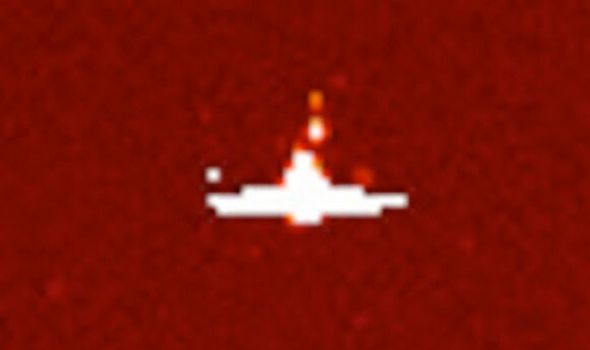 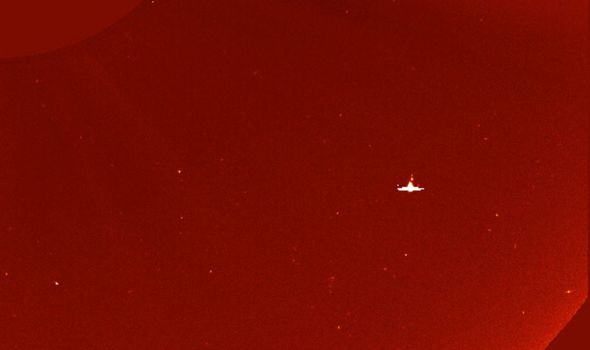 "The aliens seem to be harvesting a rare particle from our sun"(Image: ET DATABASE)

"The aliens seem to be harvesting a rare particle from our sun and taking to their own world far away. As you see from the two photos, the UFO is several times larger than earth itself.

"100 percent proof that aliens are visiting our sun on a regular basis."

Scientists who have worked forNASAin the past have a much simpler explanation for all of the bizarre UFO sightings reported.

According to former NASA engineer James Oberg, most UFO sightings are nothing more than “space dandruff” floating in front of cameras. 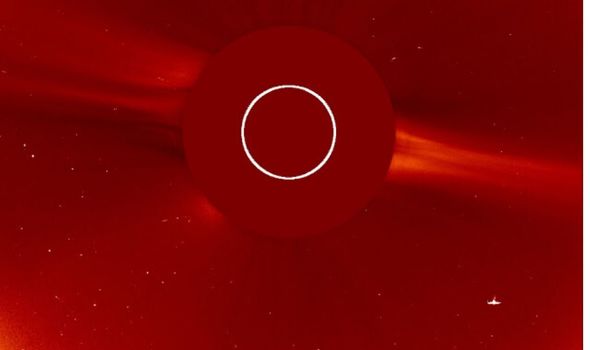 The UFO is apparently three times the size of Earth(Image: ET DATABASE)

These specks of dandruff can be anything from bits of chipped paint drifting aimlessly in zero gravity, flakes of ice or spacecraft insulation that has broken off.

He said: “I’ve had enough experience with real spaceflight to realise that what's being seen in many videos is nothing beyond the 'norm' from fully mundane phenomena occurring in unearthly settings.”

Mr Oberg argued the human brain is not wired to make sense of these tiny objects floating above Earth.

This is not the first time an alleged alien spaceship has been spotted near the Sun.

In September 2018, Maria Hill from Salem, Indiana, snapped images of the Sun, which she believes show a huge UFO followed by a massive fleet of smaller crafts passing behind.

Ms Hill wrote on Facebook alongside the images: “This is what showed up in my camera after I took a picture of the sun in the eastern sky this morning. iPhone 8 with a camera lens adapter.

“A green circular door-like object is at the centre of the vortex/worm hole and a serpent snake at the top right above it, by a circular disc.

"I am sure this has a symbolic meaning with the snake and the disc.”